Python is the “de facto platform for new technologies,” according to research by the IEEE in its Spectrum publication.

The new survey places Python, Java, C, and C++ as the top four programming languages. JavaScript, which typically tops such surveys, is in fifth place.

By contrast, StackOverflow reported earlier this month that JavaScript was the most used language by some margin, with 65 per cent followed by Python at 48.2 per cent and Java at 35.35 per cent. Redmonk analysts also placed JavaScript top, as does developer tools company JetBrains in its State of the Developer Ecosystem survey. The answer is that no survey has greater authority than its sources, which despite the best efforts of researchers have all sort of biases and limitations. The matter of what to measure is also up for discussion. Should researchers attempt to discover how much code is written in each language? Or which are best known (a win for JavaScript since it is hard to avoid)? Or which have most job opportunities? Even the question of who counts as a developer is up for grabs, with a spectrum from occasional hobbyists to full-time professionals.

In the IEEE’s case, the methodology is shown here. It uses “11 metrics from 8 sources,” we are told, these sources being Google Search, Google Trends, Twitter, GitHub, StackOverflow, Reddit, Hacker News, CareerBuilder, the IEEE job site, and an IEEE digital library. This particular methodology does look weighted towards “most talked about” rather than most used, which is not the same thing, as well as likely over-representing North American and European developers. Still, a nice feature of the IEEE survey is that users can apply their own weighting using simple controls. We found that Python still came top in most configurations.

Drilling down still yields some intriguing results. Setting the controls to look only at GitHub repositories, for example, we got results that made little sense. Dart leaps into second place – lots of Flutter projects? – while Julia, a statistical language, is third.

The Register is suspicious of these results: a project called GitHut that tracks GitHub pull requests places JavaScript first, Python second, and Java third. GitHub itself reports on language usage and shows JavaScript consistently top between 2014 and 2020, though Python has climbed from fourth to second place over that period. 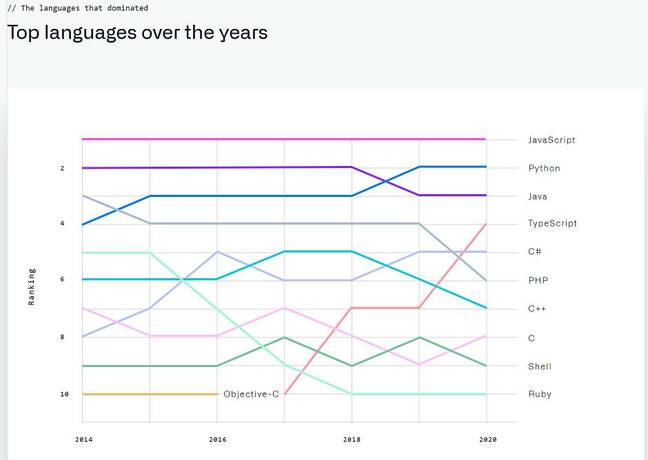 The PYPL (Popularity of Programming Language) index, which is based on “how often language tutorials are searched on Google”, places Python in the top spot by some distance – 29.93 per cent, ahead of Java at 17.78 per cent.

It seems reasonable to conclude that while JavaScript might by most measures be the most popular language after all, it is for sure not the most searched for or talked about. Another fact to emerge from this survey of surveys is that whether first, second, or third, Python usage and growth is huge. For those who do not know the language, perhaps it is time to search for a tutorial? ®