Data from HackerRank’s skill assessment platform shows that the next generation of in-demand talent is coming from universities you may not expect, such as New Jersey Institute of Technology, Oregon State University and University of Texas.

HackerRank is a technical interview platform that helps companies find the best programming talent from anywhere in the world. Looking at it from the other side of the hiring equation, it offers over 11 Million developers the opportunity to practice their coding skills, prepare for interviews and get hired.

According to Vivek Ravisankar, CEO and Co-Founder of HackerRank:

“We believe that practical skills are the foundation of hiring tech talent. When companies emphasize skills over pedigree, they can mitigate bias and broaden their talent pool while efficiently finding the best candidates at the same time. In turn, developers can showcase their skills, rather than stress about the interview.”

HackerRank’s latest research findings focus on the search for entry-level recruits straight from university and starts from the premise:

Historically, many employers have limited their searches for entry-level technical talent to universities with top-ranked computer science programs. As the world begins to emerge from COVID-19 – with companies hiring in droves and demand for software developers far outweighing supply – it’s an ideal time to rethink that approach. To remain competitive, employers must seek tech talent in new places.

To discover the new sources of job-ready students, between January 2020 and April 2021, HackerRank reviewed more than 1 million certification attempts in 14 skills made by university students to establish a performance-based University ranking for different skills. The analysis  was limited to universities with  statistically significant volumes of attempts and included 1149 universities from 102 different countries and the published findings looks at just 6 skills: 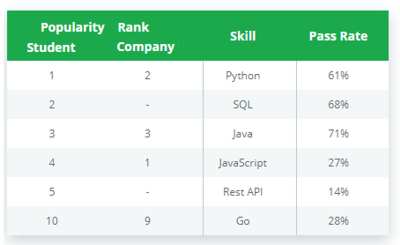 From the student’s perspective the three most popular languages in which to earn certifications were Python, SQL and Java and it was Java which had the highest Pass Rate for the certifications they attempted.

The skill companies are most concerned with is JavaScript but HackerRank comments:

Despite its widespread use by companies like Netflix, PayPal and Instagram, there is a palpable dislike of JavaScript in the developer community, and its certification success rate hovers at just 27%.

Go has a similar certification pass rate but despite its growing popularity thanks to being used at Google where it originated and at Uber and Dropbox it doesn’t figure in any of the university league tables that are included in the report, covering the United States; EMEA;  India and APAC apart from India which are restricted to Python, Java, JavaScript. SQL and the Rest API.

The only institutions to be included multiple times in the EMEA table are ETH Zurich (1st place for Python and 3rd for Rest API); University College Dublin (1st for Rest API and 3rd for SQL);Technical University of Munich (2nd for both Python and Rest API); AGH University of Science and Technology, Cracow (4th for Java and 5th for SQL). Universities in Egypt appeared five times – in 1st, 2nd and 5th place for JavaScript, 2nd and 4th for SQL, while Turkey figured four times (2nd, 3rd and 5th for Java and 4th for Rest API)

In India the University of Mumbai is in the table for every skill. It comes top for Python, JavaScript and the Rest API and is second for SQL and fifth for Java. PICT (Pune Institute of Technology comes top for Java and SQL. VIT Chennai is in the table for all five skills, while VIT Vellore occupies two slots, as does Anna University which is also located in Tamil Nadu.

In the remainder of APAC Bangladesh occupies no fewer than 7 slots in the table including the entire top row, with Rajshahi University of Engineering and Technology in 1st place for both Python and Rest API. Sri Lanka has four entries and does Indonesia with Hong Kong, Australia having three each, showing that programming talent can be found around the globe.