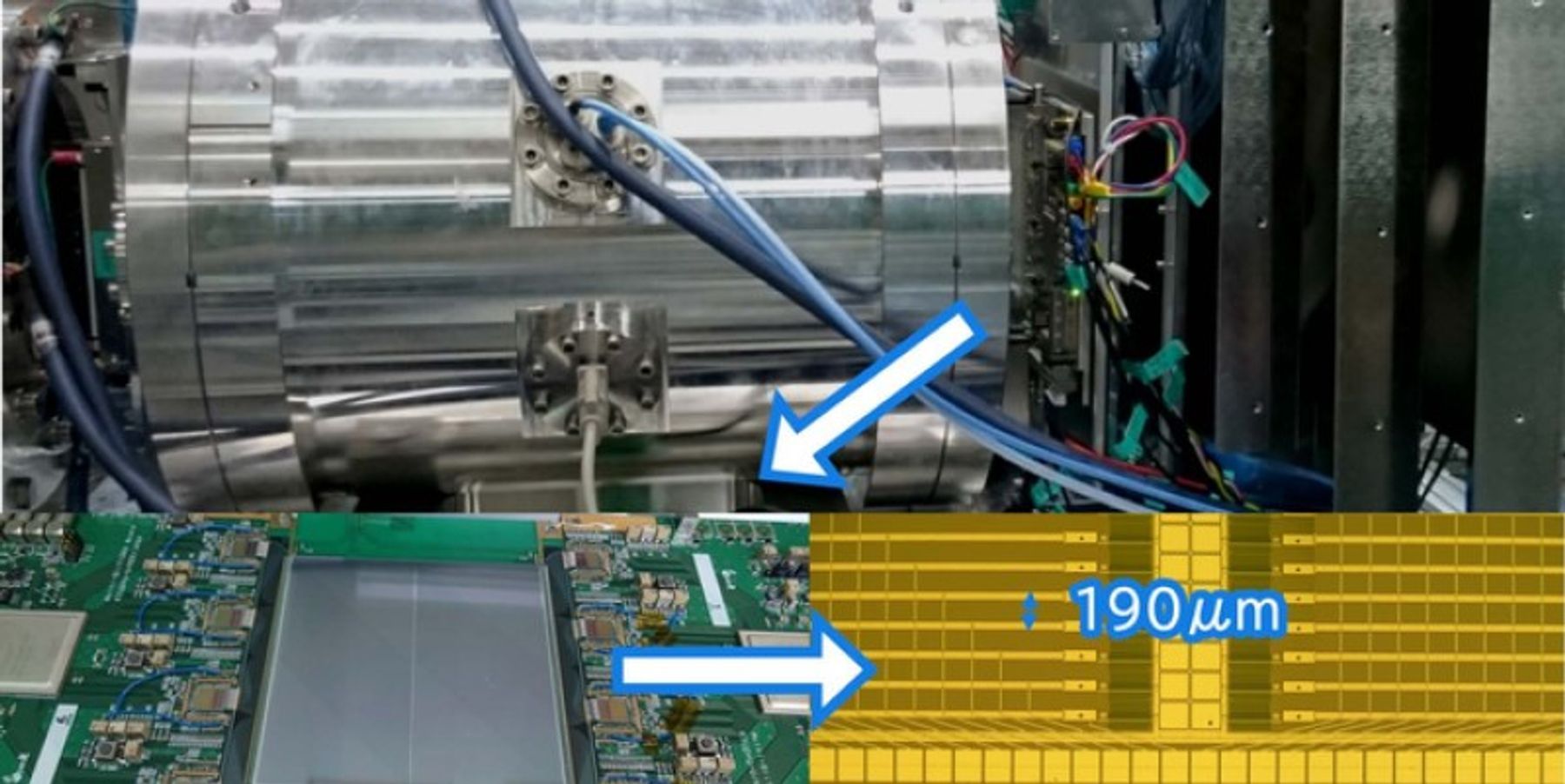 (Top) The outside of the apparatus installed in a particle accelerator at the J-PARC facility in Tokai, Ibaraki Prefecture, north of Tokyo. (Lower left) The electronic components including a high-precision sensor. (Lower right) A detailed microscopic image of the silicon sensor that makes the observations.

Physicists have created a new way to observe details about the structure and composition of materials that improves upon previous methods. Conventional spectroscopy changes the frequency of light shining on a sample over time to reveal details about them. The new technique, Rabi-oscillation spectroscopy, does not need to explore a wide frequency range so it can operate much more quickly. This method could be used to interrogate our best theories of matter in order to form a better understanding of the material universe.

Though we cannot see them with the naked eye, we are all familiar with the atoms that make up everything we see around us. Collections of positive protons, neutral neutrons, and negative electrons give rise to all the matter we interact with. However, there are some more exotic forms of matter, including exotic atoms, which are not made from these three basic components. Muonium, for example, is like hydrogen, which typically has one electron in orbit around one proton, but has a positively charged muon particle in place of the proton.

Muons are important in cutting-edge physics as they allow physicists to test our best theories about matter such as quantum electrodynamics or the Standard Model, with extremely high accuracy. This in itself is important, as only when a robust theory is pushed to its extremes may proverbial cracks start to form, which could indicate where new, more complete theories are needed and even what they might be. This is why the study of muonium is of great interest to the physics community, but up until now it has evaded detailed observation.

“Muonium is a very short-lived atom, so it is important to make quick observations with as much power as possible in order to obtain the best signal from the limited observation time,” said associate professor Hiroyuki A. Torii from the Graduate School of Science at the University of Tokyo. “Conventional spectroscopic methods require repeated observations across a range of frequencies to find the particular key frequency we are looking for, known as the resonance frequency, and this takes time.”

So, Torii and his team devised a new kind of spectroscopic method that makes use of a well-understood physical effect known as Rabi oscillation. Rabi-oscillation spectroscopy does not need to search for frequency signals in order to convey information about an atom. Instead, it looks at the raw sensor, or time-domain, data over a shorter amount of time and delivers information based on that. This new method offers vast improvements in precision.

“The study of exotic atoms requires knowledge of low-energy atomic physics and high-energy particle physics. This combination of disciplines within physics suggests we’re on a path to a more complete understanding of our material universe,” said Torii. “I’m eager to see physicists use Rabi-oscillation spectroscopy to peer ever deeper into the world of exotic atoms containing unusual particles and isotopes, and other kinds of matter created at particle accelerators around the world.”

Read More:Exotic Matter Is in Our Sights